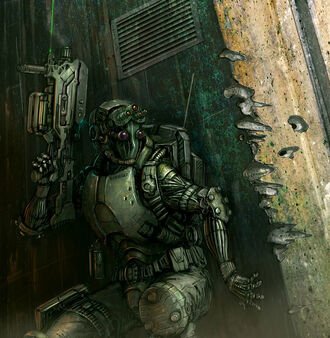 They're called 'quick lads' and I'll tell you why. They shoot first, ask questions later. Even some Blupans are better than that! -Wronko
(Coraabia Artist: Alex Iglesias)

If there is a perfect example of rampant bureaucracy raging in security forces, it would definitely be the case of Lubro. Agents of this investigative bureau with nebulously defined sphere of competence spend most of their time scheming against and hassling with the competing Agents Zmuchlan. Both of these sleazy institutions have basically the same legal authority, both often get involved in matters completely out of their jurisdiction and both never hesitate to use techniques straight from the criminal underworld. Lubro closely cooperates with the governmental department Xe-Tech, which supplies the agents with the best camouflage technology bought from Wakian middlemen.

Lubro and Zmuchlan both spend big trins on mutual bribing of the agents so it is almost never possible to determine who is currently working for which side. Therefore, the agents use one of the most complex systems of passwords ever created. Only the initiation of a conversation usually takes up to tens of minutes.

Even though no one would admit it nowadays, Lubro came into existence only as a result of inaccurate transcription of a sanitary edict. The original bureaulog 'I_und.or I_ub.ro' (wash and wipe after the beating of a prisoner) was recorded in the new database as 'lun'dor Lubro' (establish bureau Lubro). None of the Bureaucraths took the trouble to crosscheck this strange decree.