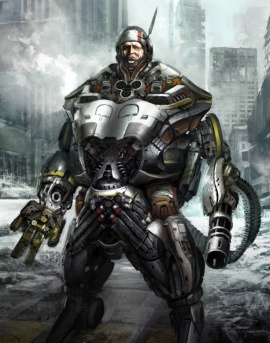 That guy wears an ironmongery. Initially, I thought it was manly, but later I found out it's only Ajaarpa's homely fetishism, which is supposed to hide his deficiencies. -Bada
(Coraabia Artist: Martin Deschambault)

Ankh Ajaarpa is older and more sensible than his sidekick Knecht, with whom he operates in the streets of C'Ora - Ajaarpa is not lacking in prudence, he knows how to keep a cool head in every situation. This Kop is literally brimming with natural authority, which makes his job much easier. His specially modified mecha-armor does wonders as well. While most of it came from a discarded Ligan series given to Coraab as a fraternal assistance years ago, Ajaarpa recalibrated the armor and modified it to fit all needs resulting from his hard work. All this makes up the recipe for his excellent results – he has been nominated for Sector Tu'Kop thrice, twice successfully.

One of the lesser known facts is his longterm secret relationship with Bada, who served in the same precinct for several years. The disciplined Ajaarpa did not want his work to be pervaded by unwanted emotions so he practically ignored Bada in the workplace. She could hardly stand it though and in the end asked for a transfer to Sector 4. That spelt an end to their relationship.

Ajaarpa is not as clean as it might seem. He secretly patented the unique adaptations to his armor and incognito sold the licence to Khalfassan smugglers. When his buddy Knecht found out, it took a very fat bribe to forever sweep the whole affair under the rug.