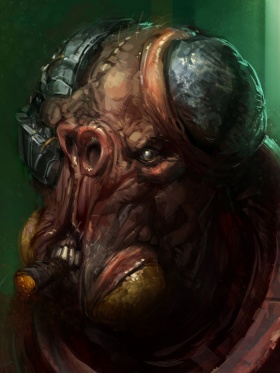 While armo Wronko was born on WaalkWak, he spent most of his career fighting Reddans on Coraab. It was he who repeatedly warned that Orbital University was fatally vulnerable from an outside aggression.
(Coraabia Artist: Carlos Cabrera)

Armo is a general term for a high-ranked officer in the military or police forces anywhere in the stringified multiverse. While there are regional differences between worlds, the basic perception of an armo is roughly the same. Armos lead armies, assume responsibility for the success of operations and therefore possess substantial power. Their accountability to political or economic agents differ significantly among worlds.

Military coups lead by armos are a common occurrence in some regions. Such a tyrannical military despot often ends executed in front of a martial court.

Armos currently possess the greatest power on unstable worlds like Bolga and Yttor.

Ranks on the Cosmopolitan Worlds