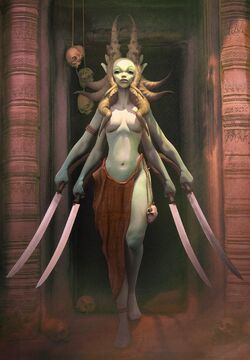 One historian used to claim he had an irrefutable proof of Azuras existence. Yet on the eve of his proof-bringing sub-conference, he suddenly disappeared along with the much needed evidence.
(Coraabia Artist: Pascal Blanché)

The distant Kazaar plateaus always incited imagination of explorers and dreamers alike. This unique environment - one of the very few biotopes unaffected by the Dump - remained unchanged since the ancient arrival of Dumpers to Coraab and gave birth to many real and mythical creatures. Azuras are supposed to be the latter - their existence has never been proven. Although several ancient texts mention their names, no tangible evidence supports the idea of any intelligent lifeforms ever living on the inaccessible and remote Kazaar plateaus. Azuras are usually described as four-handed battlepriestesses, fanatically worshipping the sacred biomass Chog-th. They are also credited with building the legendary Dome of Pillars.

Azuras were fabled to be very dangerous foes to meet in combat. Being able to use four deadly slashing weapons at once, they peppered their foe with attacks at a pace that was almost impossible to block. The defeated opponent was subsequently cut to pieces and fed to the ever-groving biomass to strengthen its power.

One theory suggests that Azuras were in the end eradicated by the biomass Chog-th itself, which spreaded beyond control due to the constant feeding. In 3940 Tu, a xennoarchaeologist expedition investigating the supposed ruins of the Dome of Pillars uncovered two skeletons that possessed several pairs of arms. Unfortunately, any additional research in Kazaar plateaus that could confirm these findings has been out of question as of late due to the lack of available funding.