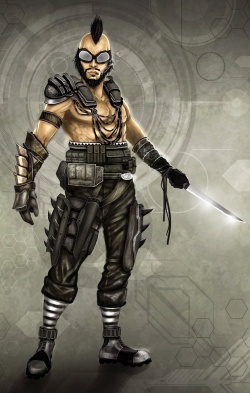 Although he was born into a decent Agan family, Bagdeg was displaying disturbing pathological features already as a young boy. He was selfish, lacked any kind of empathy and ahowed indifference in matters of good and evil. When his nursemaid asked him whether he liked his mother more than his father, he answered that he did not care and all that mattered was who was willing to pay more. Despite being a rather weak and sickly child, he always dreamed about becoming a contract killer, no matter if for the police or for some criminal organisation. As soon as he reached adulthood, his father secured him a spot in the local police corps. Bagdeg was soon fired, though, as he solved even trivial cases of vandalism by shooting the offenders. However, this attitude granted him a job in the agency Bonnax, whose specialization is contract manhunting. Bagdeg thus became one of the lucky few for whom their work is also their hobby.

Bagdeg arrived on Coraab in 4270 Tu because of one Bonnax contract. The efficiency with which Bagdeg remorselessly butchered the tracked victim caught the eye of a local bureaucrath. As Bagdeg's departure was delayed due to the Dung uprising, he accepted the unofficial contract to terminate several of the bureaucrath's ideological opponents. Unexpectedly, instead of fulfilling the contract, Bagdeg simply turned the bureaucrath in to the local security forces - they paid more.

During his stay on Coraab, Bagdeg was also hired by two high-profile C'Orian criminals. He cashed in the advance payments from both rivals, killed both of them, and requested the remaining rewards from their relatives. He even visited the InCorps headquarters and demanded bounties for their deaths - the InCorps imprisoned him for a murder instead. Bagdeg quickly contacted Eluk Bonn himself. The threat of possible transplanetary scandal got him out of jail in no time.