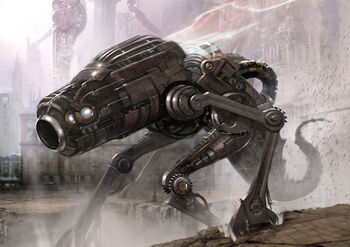 Reddan walking artillery known under production numbers KHE°200 and KHE°220 first demonstrated its power during a diversion manoeuvre in 3917 Tu. Redda send several assault brigades to Coraab, hoping to invade the peripheral areas of C'Ora. The assault was not very successful, however, and InCorps routed the invading units. A single walking artillery survived the counter-attack by chance, as it switched to the autonomous mode due to interware malfunction caused by a sniper hit. Instead of joining the frontal assault, it disappeared in the vast areas of the Periphery. And so the legend of Barra'Kheetai was born - a legend of a roaming death-belcher, which tends to appear time to time. This Bar-Khet is thus most likely the only functional reddan machine on Coraab and the government offers high reward for finding it.

Sensation-hunters are discussing to this day, whether Bar-Khet's primary weapon is still functional even after the interware malfunction. The weapon is the feared stratospheric cannon YP-55-51R with effective range of many dozens of kilometres. The sensors have detected a high energy output several times in the Periphery areas, but it was always proven in the end that it was just a metal storm, Dump outflow or fire.

The non-functional torso of Bar-Khet was in reality found in the Periphery already around 4091 Tu. Ilokaj named Čad extracted it from a swamp and sold for a bargain to the uufthakan boters. These repaired Bar-Khet to the original functional state and started to use it to defend their trading colonies. They are very careful to not reveal the possession of the reddan combat unit to any outsider, though.