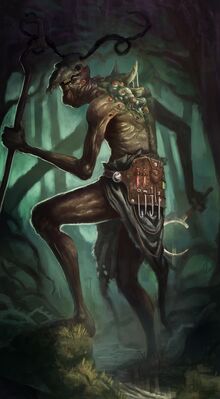 Shaams were indigenous healers and dream interpreters.According to ancient legends, some of them were also capable of controlling the elements and could influence weather. The real power was in the hands of Black Shaams of the Baians. They had a symbiont, called Thei Kai grown into their backs, which kept releasing various substances into the host's body. These could sometimes cause battle berserk, night vision, stun the body with a neural poison or strengthen it with substances prolonging life. A young Baian could take on the path of a Bei Shaam right after the adulthood ritual, if he heard the nature's call during his "dream journey". Such event usually only happened once per generation and were subject of monumental celebration connected with sacrifice of hunted animals or even better - enemy prisoners. Their blood was poured into the Shaam's eyes to teach him to see the pulse of life.

"The Nature's call" was the process of luring the creature known as Thei Kai. This already extinct meta-slime was feeding on mental energy of annorean animals, which could not resist his psychic call. Some Baians were empatically more sensible to this call and felt need to seek Thei Kai out. Lower creatures were always killed by Kai's energy demands, but Shaams became his symbiontic partners thanks to their higher resistance.

Sometimes, it happened that a girl heard the Thei Kai's call. If this "gift" is noticed soon enough, such girl became the accoucheuse of her tribe. The price for this honourable post was a painful ritual, during which she was sterilized by the other accoucheuses. A girl that managed to merge with Thei Kai was hunted and killed without remorse. A female Bei Shaam was said to be able to control or even kill others with a mere thought.