• When a character goes Berserk, the new duel is a full-fledged new duel so all limits for actions per duel are refreshed and the character is not affected by any effects from the last duel except for the effect of its Berserk.

• Berserk can be repeated until the character loses or leaves the duel.

• Berserking character's points are cumulated in a circle next to its poins until it wins a duel and its controller decides to not continue Berserking - then both the points accumulated from previous duels and points from the current duel are added to player's Score.

• Points from previous duels are only carried over to the character in Berserk and are lost when that character leaves the duel.

• If Berserking character wins a duel thanks to Domination, it will gain no points from that duel but will carry over points from previous duels.

• When a character goes Berserk, the duel is not counted as a Duel Win for that character and does not trigger the modifier Win but it triggers the modifier Loss for opponent's character.

• The ability effect triggered by Berserk is a one-time effect. 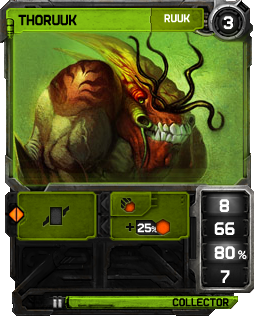 Gallery of cards with berserk