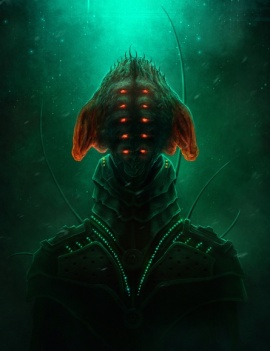 Traxol pukebaron Beupo XII fled to Coraab long ago in hope to escape gigantic fines for tax evasion in his homeworld. He was soon caught by the authorities and secretly deported back to his homeworld. Beupo XII was left in an alien environment only with his despotic and paranoid mother that kept him locked up in isolation vat until his adulthood. This caused deep scars to his personality, the young Bozak became obsessed with studies, despite his mother's efforts to prevent him. It concluded by him poisoning her vat and escaping from home. In hiding he then composed an essay about the essence of life basis. His phenomenal knowledge of xennobiology soon caught Ikram Dogo's attention and Beupo was instantly recommended for studies at the Orbital university.

Beupo's career on Orbital university skyrocketed. After Ikram Dogo's death there was no doubt about who will be the next rector. The Bozak, intoxicated by the power, only now revealed his true bestial nature. He created a new kodex that greatly discriminated Tals and the unliving over xennos. He even forced planetary government to allow death sentences. Orbital university grounds soon saw torture and deaths of thousands of Oroists.

Beupo XII's tyranny lasted for almost 50 Tu and ended by his quite natural death. Coraabians wonder to this day how this sadist and murderer could keep his position on the Orbital university for so long. Students nicknamed Beupo Ba'Sonh (Ten-eyes). Beupo often went into fits of rage and literally ripped some of his subordinates to pieces or jettisoned students publicly into the deadly vacuum of space.