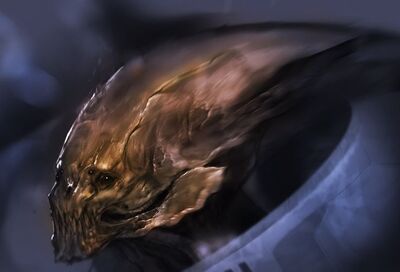 Bo-Ke was known as an incorruptible and ambitious kop serving in C'Ora in today no longer existing Sector commandos 0-LAMAE. In a corps plagued with omnipresent corruption and tardiness, Bo-Ke morally and physically stood out as a corabit beacon of hope. His record number of Tu'Kop awards allowed him to gain access to influential C'Orian officials including Hermes, who felt the need to control Bael's ambitions. While Bo-Ke accepted his offer to become an armo, he carried out Hermes's orders with great reluctance. Internal struggle ate away at Bo-Ke for several long Tu before he learnt of a legal loophole that allowed him to found a special independent elite unit Bahoofa. To stress out his protest, Bo-Ke even resigned from his armo position.

Hermes was infuriated by his rebelling subordinate and decided to punish him. When Bo-Ke returns home one Haze, he found a crushed body of his life partner Shi-Dzin in the meditation chamber. Bael immediately realized who stood behind such a heinous act and decided to forever free Bahoofa from the thrall of planetary government. Bael detectives then started to report only to Bo-Ke himself.

In 4017 Tu, Hermes's patience finally snapped. On his order, the army units of he Circle Council occupied the headquarters of Bahoofa and arrested Bo-Ke along with several of his inferiors. In his absence, the control over the institution was seized by armos loyal to the government. Bo-Ke was put in front of a show trial for high treason and exemplary executed two Tu later. In spite of that, his honor, diligence, and self-sacrifice has been a shining example for all members of Bahoofa until today.