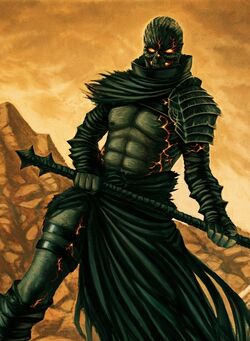 Bogg Dungs (also called Black Dungs) were a unique Coraabian ethnicity of their time. They differed in many aspects from other Dung tribes - their body temperature often reached the boiling point during combat while their black and rough skin was able to withstand most known acids and chemicals. Even the composition of Bogg reproduction vats was unlike any other. In the time of hatching, the vats were lit ablaze to accustom the newly spawned younglings to extreme conditions. Bogg communities were tightly knit together by ancient alliances and strong clan bonds. Their society obeyed strict morals - breaking the rules often cost the offender his unlife. The only remaining traces of Blackdung settlements can be found on the Naan plains, nowadays surrounded by a multifunctional touristic resort.

Miners always wanted to see Boggs working in the Tal colonies. Their constitution made them ideal candidates for hard labor in foundries and deeper levels of Dump drillholes. However, over the course of 200 Tu, Miners managed to enslave only few hundreds of Boggs. Their geographical isolation and almost suicidal resistance to enslavement made most Miners' efforts futile.

It could be expected that Miners would intensify their pressure, gradually bending Boggs to their will and forcing revolting settlements to cooperation. Before such plans could come to fruition, however, Black Dungs mysteriously went extinct. Historians initially blamed [[Tal]s but the culprit was ultimately determined to be a spontaneously reproducing mycobacteria of the genus Wohrtakaakanne.