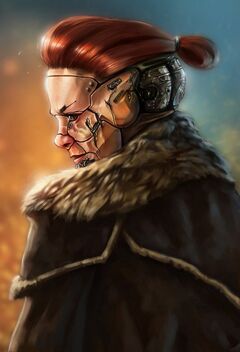 Her original name is unknown. Bol Chenai lived on Bolga until the putsch that broke out in 4245 and paralyzed the whole planet. The new fundamentalist regime, among other laws, imposed a ban on Automatons, which the mercenary used in her business. Shortly after the ban, she left her homeworld. Chenai wobbled to WaalkWak, where she bought a bi-concession and to this day flies a huge magrav between Kywak and Bau-Zonda. On Zondan Mattudar she usually supplies local complexes with bi-methane and tries to earn some extra money by selling industry blueprints from WaalkWak competition. Chenai leads a lonely and mysterious life. She seldom leaves the ship and even in docks she prefers to stay inside her magrav (familiarly called Lgollo), where she grows rare meta-timbers and meditates.

This Ekhro woman is widely known for her uncompromising bargaining skills. A story still circulates among Mattudar grav-yard workers about Bol Chenai forcing their business director to raise the purchase price of bi-methane - Chenai bargained for so long that she lost her patience and punched his contact lobe with full force.

After some time, WaalkWak officials found out about her smuggling of sensitive information from the local concerns and exposed her. The directorate of the industry giant Qqant hired several Sols to "put things back in order". The assassins set up a bomb trap for Bol Chenai - the explosion torn her face apart. The mercenary miraculously survived, but had to undergo an extensive and expensive face transplant.