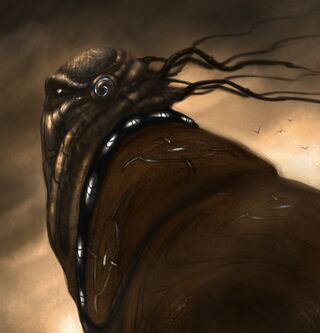 Boomas managed to survive all economic and social crises thanks to their subtle cooperation. Ciphered price making, customer referral and coordinated blackmailing of their competition lead to the creation of local monopoly.
(Coraabia Artist: Alex Ruiz)

The history of the wakish Booma ethnic started long before the colonisation of Waalk. It was a wealthy group of traders, which on basis of the so-called salty deal established a guild to shield their trading activities. This gradually limited the competition and eventually forced it to step away from all the Booma markets. In the end, the Booma guild made it to the government, where it seized the monopoly for economic advisory. The guild's power and wealth reached the peak. Boomas also took their part on financing the Waalk colonisation by backing tremendous investments into the centralized system of science and development, which defined the highly advanced society of today. The increasing level of education and automation of decision-making processes was however slowly putting them away from the steering wheel. The guild suffered from inner turmoil and eventually fell apart. The backbone of the guild was definitely broken by the third tektonik in 2403 Tu.

Despite the official dismissal of the guild by the tektonik office, several individuals keep on titling themselves as Boomas. Surprisingly, these rebels hold on to their traditions and preserve the legacy of the Booma glory in their houses. They treat their customers with arogance, as if it was the customer's privilidge to be able to buy something from them. Most of the time, this discourages the customers from further deals, but for some of them, this behaviour is a sign of power.

No Booma have never acquiesced with the end of their guild. The house lead by the ambitious Ekqqqok established the Qikkkku company, which sponsors colonisation on the developing worlds. The colonists have to pay off the loan for dozens of orbits and also become the sole trading territory of the Qikkku company and the affiliated Boomas. Ekqqqok likes to be titled as Qi-Booma by his trading partners.