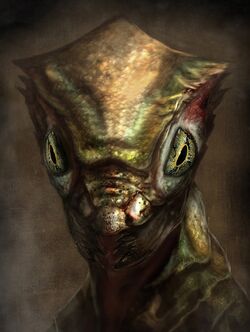 The amphibious Soops are divided into many sub-species - one of them is the sauropelvic Boqqa. These Soops can usually be found on Waalk and they are actually quite rare on the giant's satellite co-planet Wakk. Although they are amphibious, Boqqas prefer land over water. If they decide to descend into the depths of planetary oceans, it's only for a single reason - to refresh their active knowledge of Wet. Boqqas are pefectly suited for the role of konstruquakks. Their remarkably fine motor skills and keen sight make them indispensable workers of the Soop ghettoshipyards. According to a research from 4267 Tu, eight out of top ten best-paid "quakks'" are Boqqa Soops. They are also well-known for their quarreling nature in all ghettoshipyards on the complanet.

These master technicians delight in debating in Wet. There even exists a Soop society called Qoopa-WWa which meets every Tol in shipyards' tanks. All their discussions are then held in every known dialect of the Wet speech. Unqqqas are the best orators in Wet thanks to their flawless knowledge of all the dialects, including the nearly forgotten SOOONQ-SUQ.

Foremen in dry sections of the Soop ghettoshipyards are usually recruited from the ranks of Boqqas. If the management installs a Soop from any other sub-species in the function, Boqqas will do anything to make him leave, willingly or by force. If the other Soop manages to hold onto the post for more than one production cycle, the Boqqas will not hesitate to protest by starting a hunger strike or ceasing to work altogether.