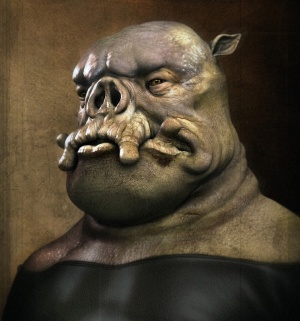 A kiss from Bulthai is the imaginary jewel of Bordillox's collection. A traxollian virgin butt ordered through the haze market on oroi is the closest he could get to her sensuall lips.
(Coraabia Artist: Adrian Chan)

Bordillox worked on a debotting line of the wak industrial giant Qqant. He frankly hated his job and entertained his colleagues by explosions of uncontrolled rage in moments of repeated failure at fine manipulation with the maintenance tools. He usually released his frustration in water arenas, where he showed off his skills with other warriors in the Wak'Su combat sport. In 4260 Tu, he even qualified to the planetary finals in the Kkkw category and the bets were largely in his favour. This was quickly misused by the infamous ulli-mant bookmaker Chacha-San. He strengthened Bordillox with a combat stimulant and placed a generous bet on his loss. Bordillox won - as expected - but the subsequent doping investigation ended up in annulment of his victory. The unfortunate Mghor thus lost his combat license.

To avoid possible backlash, Chacha-San hastily visited the raging Bordillox. Pretending deep regret, he generously offered him a free wobble to Coraab, where he arranged for him a bouncer job in his cousin's establishment. He promised him that he will do everything to reinstate him back as a famous champion. After some time, Bordillox realised that he actually likes his stay in the most visited bar of the c'orish Sektor 4 and decides to remain on Coraab.

After spending some good time at Golden ZanX, it became an unwritten rule that satisfied female customers would kiss the jovial bouncer. None of them knows, however, that there is a romantic soul of a kiss collector hidden under Bordilox's thick mghorish skin and that he scans their genetic traces using his bio-moustache impregnated by ikromazol. He keeps these traces permanently in his obscure collection.