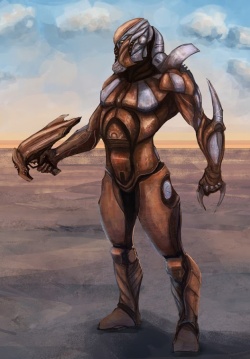 The Rusty Dunes of Coraab were always a dangerous place. BrokHat, however, did not become a huge transport antigrav captain to have any kind of respect for the local extreme environment. This Werdio makes his living by shipping bulky cargo over long distances. He cruises the Coraabian wastelands for whole Tu, all alone, without coming into touch with any kind of civilized life. Although he spends most of the time in seclusion, his behavior in the trade colonies is very cultivated. BrokHat is very fond of etiquette and always tries to learn at least a couple sentences from the current customer's language to show his respect for the other party. Thanks to the dingy color of his protective exoskeleton, he was nicknamed the Rusty Hat in some of the detached Coraabian regions.

BrokHat had to work all the roles on his grav. He drove and repaired his vessel, dispatched cargo, accepted contracts. When necessary, he protected himself and the cargo with a weapon in hand. It is said that when a pirate gang on monogravs attempted to stop him, BrokHat did not hesitate to drive his antigrav into their ranks to smash a good half of the attackers.

In 4273 Tu, the Coraabian network oroi transmitted a report that BrokHat vanished without a trace together with a cargo of hairy dates he was transporting from C'Ora to Buun B'Taan. The case has not been conclusively solved to this day. Some speculate his antigrav sunk into a Dump gorge during a strong earthquake which was recorded in the surrounding area at the time. Others claim that the Rusty Hat still cruises the Rusty Dunes today.