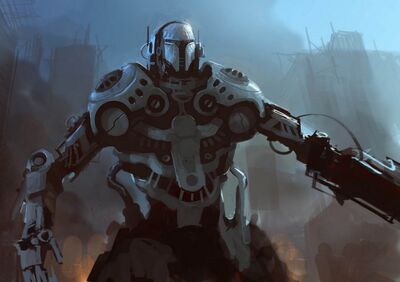 The khalfassian Third war of honour in 4105 Tu - 4109 Tu brought to life an effective combat conversion of a service bot, later marked as BUDDA series. It was created as an universal concept, how to turn a civilian unit to a capable guardian with minimum of effort and resources. The serial body of bot got armored with recycled corabit parts from destroyed combat machines, hassalian over-bridging was used to bypass the pacifism blocks and a simple electro-cannon was attached to the skelet. The service bots have high social intelligence, which helps the sizable BUDDA to quickly learn from its owner to analyze and solve new situations. The absence of advanced aiming routines is overcome by use of diffusion weapon, which sprays the target with a burst of dangerous discharges.

The project BUDDA was created by Hassaj, who was a technician of the fusion power plant Bu-Folssa. In desperate effort to protect himself and his colleagues from the advancing front, he reprogrammed and rebuilt a simple service bot to a combat machine. He connected six portable tokamaks to an adjusted electro-cannon. The devastating streams of energy launched from the central production hall of Bu-Folssa literally torn the attackers apart.

According to some historians, the BUDDA concept was not the only defensive machines used by the endangered civilians in Bu-Folssa. Hassaj allegedly constructed even a mobile walking bomb known as BUDDB. It was created as a connection of four manipulation bots carrying a middle-sized tokamak, which was overloaded and brought to controlled explosion in the right moment. However, no evidence remains to confirm this mad concept.