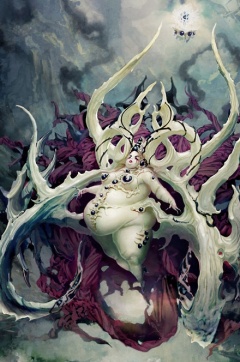 Born as Tokoi Buma, the owner of a militant modeling agency Kraasox. Bukella based the style of her "empire of beauty" exclusively on plump shapes and she succeeded. Corpulent women are usually considered one of the ideals of perfection in the Miners' society. Bukella is a traditionalist and only carefully selected Miners' models may prance on her catwalks - they say the acceptance limit is equal to one nahha (around one hundred kilograms) of weight. She herself is always the highlight of the whole fashion show. Her clientele comes pretty much exclusively from the community of Miners since most of the other races and nations utterly despise the style of Bukella's Kraasox.

Bukella hates the owner of the rival modeling agency BulthaiBaka to death. They even once had a furious fight during a ceremonial banquet - Bulthai tore away the straps from chubby Bukella's robe and made her fall down into a fountain full of wangled Klujj. The sub-net tabloid Blink! dedicated several full sub-ports to this event.

Bukella was once given a rare Xot jewel from Zapraskal himself. Complications arose when she gave an interview while wearing it - soon afterwards, a citation landed on her desk. One artisan saw the interview on the sub-net and immediatelly recognized the jewellery which was stolen from his shop years ago. Bukella was gravely offended and decided to sever all connections with Zapraskal for good.