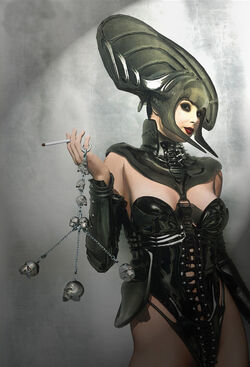 Bulthai started practically from zero and only thanks to years of hard work, she made her ambitious dreams come true. In 4202 Tu she established the legendary modeling agency BulthaiBaka (Bulthai's Bodies), which employed models solely from the ranks of Miners at first. Bulthai quickly realized she would satisfy only a tiny segment of Coraabian population with such a limited selection and so she shifted the company's focus on novel and previously unseen xenomodels. She struck gold with this intuitive move. Six of the ten best paid girls (including the so adored stars like Mooda Rai or Boua Ti) work for BulthaiBaka today. One could definitely say that Bulthai is the uncrowned queen of legal female trafficking on Coraab.

Bulthai has one bad habit: unbridled dragging on Traxolian smokes. It is said the urge is so strong she actually has to awake several times per night to have some. Allegedly, she smokes up to three pouches of Traxolian tobacco every day; trying to meet her in public without one of her omnipresent smoldering cigarettes is pretty much a lost cause.

According to some sources, Bulthai raised the money for kickstarting her business by forging the will of her rich uncle. Nevertheless, she has so many trins on her accounts today she could possibly buy one whole Sector of C'Ora. In recent years, a sub-net journal XotSokh has been regularly placing her on the list of the top one hundred richest Coraabians of our times.