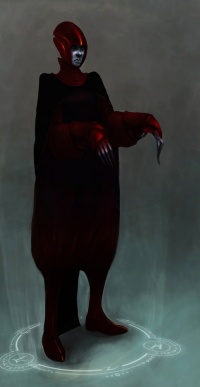 Send me a bureaulog of the notified person coded in compliance with the norm LACH-33 along with at least one indicatory Bochezaian signature limitably or limitlessly dated from Ro'Tolic Haze of this Tu and then we might have something to discuss. - Bureaucrath C14-R72
(Coraabia Artist: Joanna Kosinska)

The bureaucracy in C'Ora is possibly as old as the city itself. After all, to keep a cosmopolitan centropolis with hundreds of millions of citizens of all possible and impossible races and nations going in a remotely efficient manner requires close supervision from offices of all shapes and sizes. The caste of Bureaucraths, roughly comparable to magisterial commanders, is then in charge of these institutions. A Bureaucrath possesses practically the same rights as an officer or a politician. He represents his department at the so-called Great Bureau, which is in session once per Tu. The Bureau is presided by the so-called Enlightened Bureaucrath, some sort of an elected magisterial president. Meetings of Bureaucraths are notorious for their dullness and unreasonable length - the Great Bureau often lasts for entire Tols, which leaves quite a mark on all the delegates.

Currently, there are approximately four thousand Bureaucraths in the entirety of C'Ora. In 3991 Tu, the sub-channel CorCHA handed out the prize for the most nonsensical resort to the Bureaucrath of tentacular derivatives; according to the inaugural bureaulog, he should have been responsible for the resocialization of Xennos plagued by chronic tentacle eczemas. In reality, reporters uncovered a vast money-laundering machine connected to Uufthakan mafia.

Several distinguished Coraabian officials, including Hermes, wanted to dramatically reduce the numbers of privileged Bureaucraths in 4253 Tu. However, millions of public servants flooded the streets and resolutely stood up for their bosses. The turmoil led to long-term riots in many Sectors of C'Ora and few sharp conflicts with ICA troops. The strikers enforced a bureaulog guaranteeing all the existing functions to their magisterial bosses.