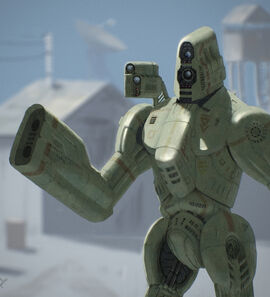 Centro-bot - promotional materials for the introduction of the first model promised a lifetime warranty period. This rate was reduced to a single Gul for the second generation due to the high failure rate of their fuel cells.
(Coraabia Artist: Sergey Rumyantsev)

Every Coraabian knows there is virtually no point in arguing over an infraction with a Centro-bot. This artificial constable records all offenses with its eyes and sends them for a real-time evaluation. In addition, Centro-bot is equipped with a wide variety of radars, spectrometers and is able to recognize up to a hundred of various narcotic substances present in the body even in trace amounts. It is impossible to negotiate, the machine fines according to a hard-wired tariff. Its navigational beacon offers access to frequencies on which all regular forces communicate, allowing to call for reinforcements in case of a problem. The government has long been relishing the deployment of Centro-bots in the streets; the production of the seventh generation is well underway.

Years ago, a small group of youngsters roamed the streets of the city, hacking the Centro-bots for fun. Due to the weakness in contemporary versions of interware, they were able to force Centro-bots to overwhelm the headquarters with so many fictional cases and incidents it was virtually impossible to discern the actual state of affairs in the streets of C'Ora. The whole "fun" cost the city several million of trins.

Modified versions of Centro-bots were bought by a public oroia Cor-7, which replaced their sensors with more powerful sub-emitters and created an army of mecha-cameramen for its broadcasts. The Coraabian government eventually banned the use of Centro-bots in the private sector and bought them back from Cor-7 for a bare one fifth of their purchase price.