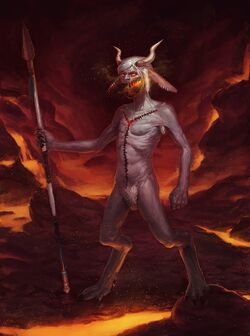 One min-log from the famous collection of Unliving treatises Yach-Log mentions uncanny living creatures which gather the bodies of the deceased in the Great Cave and dispatch them to their eternal journey to Bal'Zang. Cherzengs dissect each individual body, inject it with preservative brine and stitch it up again. If the individual committed a murder in the real world, Cherzeng would saw him to the body of his victim as a punishment. Contemporary sources claim that the myth about these tiny creatures with serrate teeth was based on an ancient funerary tradition which was once applied in the era of the Unliving states - the dead were ritually sutured into a hogtie and soused in large amphorae filled with preservatives. These traditional ceremonies were eradicated by the arrival of the Miners, but survived in the Coraabian holy books to this day.

As stated by available sources, Cherzengs were created by Nu'Ilokaj himself, who sewed them together from the remnants of other Nu'Beings, which he unsuccessfully tried to create. Cherzeng is a living being serving to the Unliving, which was likely supposed to demonstrate the superiority of unlife over life.

Traditionally, Cherzengs served to all tribes except the elitist Zombs. Zombs held the services of Cherzengs in contempt and prepared themselves on the posthumous lodges on their own. How they managed to achieve such a feat is a mystery Yach-Log fails to mention.