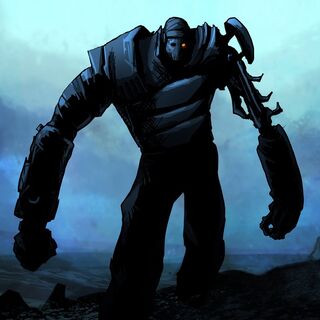 Also called Kop-bot and Chobot. A prototype of a robotic law-guardian was a creation of the no longer existing boter guild Bze3. As a first coraabian manufacturer in the history, it bought a complete license for its production and distribution from a waalkwakish WaBBo company. The first prototype BzWa33-CH, later publicly nicknamed Choppa-bot has seen the light only after many Tu of delays. Coraabian boters had only a very limited experience with a non-coraabish interware, which dramatically increased the costs of the production process. Bze3 gradually defaulted and its property was sold for a bargain to the Corash guilds. After dozens of years of disappointing sales, the guilds stopped the Choppa-bot production to stop the archaic model from competing with their own product portfolio.

Today, there exists only a several functional Choppa-bot exemplars on Coraab, none of which serving in the law enforcement units. Chobots has become a rare collectible curiosity and can be most often seen on archeotechnic meetings and in museum expositions. A law passed in 4204 Tu even forbids to attach any kind of military equipment onto these machines.

Choppa-bots initially served as a bumper for the assault kop units. Most of the time, they have drawn majority of the enemy fire-power, while the 'living' units were left unnoticed to operate in the target area. Their advantage was a decent corabit armour, their disadvantage was low mobility and likelihood to failures - only 5-10% of the purchased units were able to function normally after the first Gul of operation.