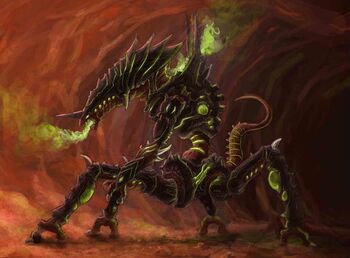 Chvojan is a common name for the working caste in the Ko-Chvoi community - intelligent meta-insects living in the depths of the planet Pretto, which has been decimated by constant ruthless mining. The Ko-Chvoi community has a strict hierarchic division of its members, where each individual fulfills a genetically defined role. Even though the individuals cannot resist their instincts, they possess relatively high intelligence which allows them to be aware of their own existence and act on their own if needed. The existence of this species was a mystery to the outside world until the first industrial digs began. When miners descended into the depths, they found an organic hell instead of the much desired minerals. They have dug into the tunnels made of living tissue which kept bleeding and in which lived hundreds of chvojans who kept suiciding on the drills in a desperate attempt to stop them.

In the end, the first wave of intruders was massacred and their flesh was used to repair the critically damaged parts of chvojans' construction. The maintenance of the living tunnels is a neverending duty of each chvojan. The widespread nets of pulsing halls secure the colony by creating comfortable climatic conditions and by masking it from possible outside detection. In return, chvojans provide the tunnels with nutrition, strengthen and build them by releasing their nourishing metabolic gases.

The miners named these creatures Chvoi, which translates as "insects" in the speech of the Pretto people. And they have treated them exactly the same way. The counter-attack became a genocide executed without any signs of moral regrets. When a chvoi negotiator appeared after several years, the Prettans were shocked. They realized they were dealing with a sentient species all along. Sadly, they already almost managed to drive the Ko-Chvoi to extinction. The scars on the mutual relations ran too deep by then and for this reason, Pretto has remained at war with the raging Ko-Chvoi to this day.