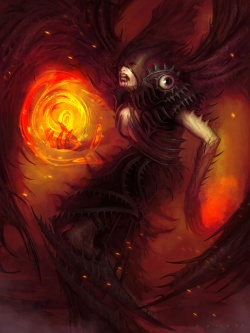 She was different than others. Superior to all the opposites, resilient and wise. It's a great shame my predecessors killed her in the end. - Valigursai
(Coraabia Artist: Mathias Kollros)

A mythic patron of Coraab, the first and honorary member of the so-called Opposite Seven. Her name has not been preserved to our times; many Yach-Drogs still dispute her very existence. Supposedly, she was Zomb'Leekai (The Awakener of Zombs), helping the first Zombs on Coraab to end their eternal slumber in their sealed Ree. According to some old copies of Ptharic min-logs, Coraabiana did so to ensure the members of her own race could enjoy supreme rule over Coraab in those times of discord and chaos. Setting aside the issue of her actual existence, this She-Zomb has undeniably joined the ranks of the cult symbols of the ancient Unliving cultures. She is traditionally depicted with a sacred fire eye Bo'Kee or standing in the middle of the so-called Zomb'Toi – a well-established circle of other renowned Zombs like Wohrra or Miniz.

Coraabiana is said to had foretold the arrival of beings, who, in their blind lust for riches hidden in the depths of the Dump, would gradually enslave or exterminate all the Unliving on Coraab. Even though the full content of this prophecy was shrouded by the sands of time, traditionalists argue that it matches perfectly with the arrival of Miners, who came to Coraab more than 4000 years ago. Others counter that this deathbringing race is still to be awaited.

Derived from the holiest scripture Eenei, the so-called Teekai min-log claims that in the end, Coraabiana was betrayed by Zombs themselves – they burnt her to ashes with an unknown weapon. Supposedly, they feared her great power. Others say Zombs got rid of her from pure envy, for she was the only one of her kind who possessed the ability to live forever after shrinking in Ree.