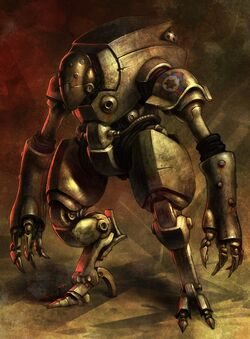 "Always hire two corporators for your protection - one will guard you from the other." - Bor Khal
(Coraabia Artist: Jason Juta)

For centuries, moneyed Miners on Coraab have been used to hiring creatures with artificial intelligence as their sentinels - based on bad experience with their loyalty, they simply did not trust the Unliving. The situation changed in the other half of the third millenium when derobotization swept through C'Ora, which prevented the general public from hiring bots or androids. The situation led to the formation of a Cosmopolitan guild of the so called Corporators. Their services were soon used by the whole society. Corporators guarded important objects, served as bouncers in prestigious enterprises or as bodyguards of potentates. Those who paid enjoyed a premium protection. Those did not, however, soon got into serious trouble.

Corporators were led astray by lure of monopoly and easy profit. After several incidents when the Corporators themselves attempted to assassinate their own clients, the guild fell from grace and withdrew from the public life. Production of bots was restored in some time and the situation in the bodyguards' market returned to the old patterns.

Corporators' guild still exist but the time of its fame is long forgotten. When Iel-Kain - a famous criminal - ordered their services, he bitterly regreted that decision. In an attempt to "protect" him, the Corporators shot down three of his harem wifes when they were bringing him newly bought ceremonial brooches to show. According to the Corporators, the women really unexpectedly appeared from around the corner while shouting aggresively.