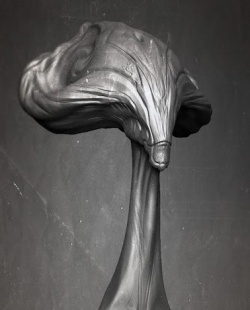 To honor his deceased father, Cyk ordered a creation of his bust and then filled it with the first brew of his lager. The bust instantly became a collector's rarity - but Cyk has no intentions of ever selling it.
(Coraabia Artist: Arnaud Morin)

The family of a Yoltak youngster Cyk Mroyak Darchdjendzug has been involved in the business of growing hairy dates for many generations. Thanks to their modesty and hard work, they made a decent living. When Cyk's great-great-grandfather happened to cultivate the legendary Mroj variety, it seemed that Mroyaks could finally rise among the Coraabian upper class. The dream was shattered by the arrival of a rich Du'Zorian family from WaalkWak, which was lured to Coraab by this highly profitable and tasty date variety. Mroyaks were only saved from bankruptcy because of the most peculiar stroke of luck. When Cyk's father found a dead Dung worker in one of the boilers used to cook the furry lager, he could not afford to get rid of the whole batch of contaminated dates and brew the lager anyways. This vintage, year 4244 Tu, became the most successful one in history.

Mroyaks fell on particularly hard times when unscrupulous Tubon assumed the leadership of the hostile clan of Du'Zors. Cyk's father was first blackmailed with flavouring his lager with fresh dead bodies purchased in local Blue Houses. When he eventually managed to thwart this allegation with the help of his lawyers, Tubon did not hesitate to play hardball and Mroyak senior soon ended stuffed in his own furry dates press.

Cyk was way too young to successfully overtook the business in such turbulent times when farms and presses needed a firm leadership. Because of his untimely death, his father did not tell him about the secret ingredient, which resulted in deterioration of both quality and taste of family lager. Armo Tubon gloated at his fate and even gave him several clues about the real cause of his father's death. The only thing keeping the furry lager Mroj alive is Cyk's relentless desire for revenge.