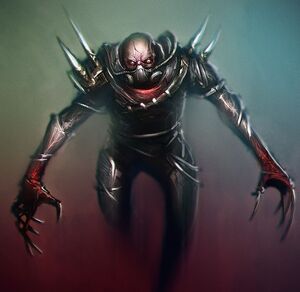 A portrait of Demesaraai put together from eye-scan fragments of one of his victims.
(Coraabia Artist: Marius Siergiejew)

Demesaraai was very aggressive from his early childhood. The skirmishes provoked by him often ended with fractures and knocked-out teeth, but also with fear of his victims that a formal complaint would bring them even more pain. As the time passed by, Demesaraai grown confident that nobody and nothing can limit him, if he manages to keep everybody scared. In addition to that, he gradually became dependent on his uncontrolled anger bursts and became a living terror of remote streets, shops and dives. The - at the time - small gangster boss Zapraskal ordered his thugs to find Demesaraai to recruit him as a tool to scare his uncooperative clients. Thanks to regular doses of brutality, it was possible to keep Demesaraai in check and his results were convincing.

After some time, the gang leadership forbid him to beat the clients. Demesaraai expressed his dissatisfaction very early. The shop of the most faithful xotter from Zapraskal's clients got decorated with intestines torn out from the shop owner's body. The bloodbath put Demesaraai last barriers aside and he embarked on bloody raid. Following the usually trail from client to client, he plunged himself on the victims without warning and torn them to pieces during daylight before the eyes of many citizens.

It was just a matter of chance that Bael Holmes stopped him, since he was just picking up a dose of [[ketamash] from his discreet dealer. The skeletal detective pacified Demeseraai very easily and put him to the 12-VORD in Goa'Kach after a short trial. The crazy mass-murderer did not find any friends even among the worst criminals and was found dead in his prison cell. Judging from the number of dead thugs around his body, he did not surrender his life cheaply.