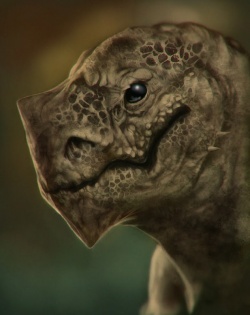 It is only a matter of time until the evolution of predators catches up to denuaar and turns its deadly poison into a sought-after delicacy. Indeed, what else is yoktoruuk than the first step in this unstoppable process. (Coraabia Artist: Stephen Flack)

Denuaars are medium-sized sauropod herbivores usually found in forested terrains of the temperate zones on Annor. Their diet consists mainly of meta-wood scales, which they obtain by rubbing their wedge-shaped head against the trunks. To defend themselves against the predators, they have developed an ability to spray a strong poison into the air through their porous skin. The aerosol mixture is not dangerous when digested or touched. After breathing in, however, it prevents the circulation of gases between air and blood, essentially suffocating the victim. For this reason, a denuaar remains dangerous even after its death. Due to the rigor mortis, the poison located under the skin slowly releases into the air - causing unknowing Annors to pay the ultimate price.

Bigger denuaar specimens are caught for breeding on specialized farms. Their poison is extracted and chemically altered to reach higher concentrations that are then used in specially adjusted bullets and traps. Such capsules stick to the body of the hunted animal and the dispensed poison leads to suffocation. While this hunting technique requires more skill, it leaves the prized animal skin intact in comparison with conventionally used weapons.

Thanks to their poison, denuaars do not have many natural predators on Annor. One of the exceptions are the yoktoruuks, who hunt them with great passion. Xennologists first thought yoktoruuks evolved resistance against the denuaar poison. Upon closer observation, it was noted how yoktoruuks kept running from the dead body again and again in regular intervals, leading to the conclusion that they learned to hold their breath around denuaars.