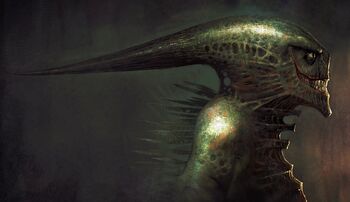 The diabolical zanXes were a real nightmare for the Miners of old. References to them still survive in frightening stories or various myths.
(Coraabia Artist: Frédéric Bennett)

Formerly called Zancht (Spike). ZanX was exterminated by Miners before the founding of the very C'Ora. According to contemporary logs, zanX was a diabolical creature that would not stop at anything in its killing desire. The book Ug Tutor mentions it as a Plunderer from the depths, emerging from holes only to disappear again as an effeminate worm, leaving behind only vats of blood and despair. Infamously known is the so-called Incident D; in 1012 Tu in a Miners' colony D-Tal, all the Unliving workers and their Miner lords were slaughtered. It was later found out that their dump veins intruded on the extensive lairs of zanXes, who used the buried cosmic colossi as their refuge. The massacre of thousands slaves, soldiers and civilians immediately unleashed a fatal wave of hatred towards them.

Diamond zanX was most likely an anaerobic creature on a carbon and boron base. It was apparently able to adapt to the extreme conditions prevailing in the depths. Contemporary annals state that zanX could not be killed by fire nor acid. Energy weapons left on its skin only minor, fast regenerating scratches. It killed its victims by shooting toxic spikes that covered its entire body.

ZanX received the nickname Diamond only later, once the renewed extraction beneath their lairs in D-Tal indirectly led to discovery of one of the biggest diamond deposits in the southern hemisphere. The letter 'X' in its name then represents the bravery of Miners from X-Tal who defeated zanXes after decades of fierce fighting. Using the ancient term Zancht has been regarded as a grave slur throughout the society up to this day.