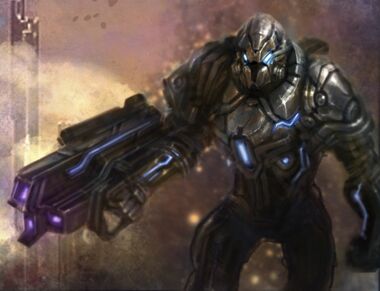 The sign Dupanzere come back, C'Ora needs you!, which was incised by an unknown author on a wall close to the Dubbu-Rang stadium after the event of 6|4270 Tu, proves the undying belief in this hero.
(Coraabia Artist: Seoro)

The stories of the unbelievable heroic acts of Dupanzer - the protector of worlds - are known by almost every Coraabian. He destroyed the mothership of the pirate fleet on his own, diverted a giant meteor from the collision course, routed the slavers from Ulgor and covered an exploding thermo-granade in front of the WaalkWak delegation with his own body. The truly perfect warrior with an unshakable bravery always ready to fight for the world. And as a bonus - he managed to be a good husband, loving father, a watchful caretaker of his ill mother and also paid all the centropolitan taxes in time. He did so much that many started to carefully ask, whether it is really possible. The actions of Diox Dupanzer gradually drawn attention of hundreds of curious nu-bloggers, but the convincing sub-video records and real scars on his body always dismissed all doubts.

The truth was revealed only after many Tu - the propagandistic and proven fictional character of Diox Dupanzer was "created" by the government authorities directly on order from governor Zula to inspire patriotism in the citizens, increase tax earnings and lure young recruits in to the army recruitment offices. The Vi-log of Diox with a clenched fist on his heart was owned by almost every tal child.

The character of Dupanzer was brought to life by a 2nd grade, but otherwise very likeable actor and masseur Ijaat Hvonsk, who later completely vanished. Officially, he was sent on a secret mission to the Xenozone in 4251 Tu and even to this day there are some enthusiasts awaiting his return. The truth is that he was removed by InCorps in order to preserve the carefully built myth, which was starting to be endangered by his ethanolism and undesired sexual preferences.