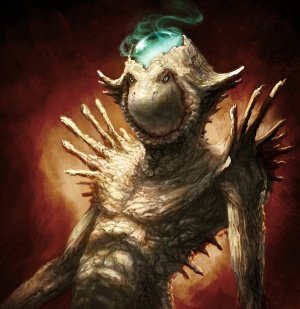 Kavokhs formally belong among the hihger unliving tribes, but some of the current sources do not really mention them due to their very low population count, or directly classify them as vatters. These strange creatures came into common knowledge with the arrival of the wigit primus Raabdwa to Min'Ora. Local unliving Kavokhs wereconsidered holy beings and treated from the beginning with almost god-like respect (this is where their name comes from). Later on, Raabdwa entrusts the protection of Kavokhs to the Bonehall. They got the best possible treatment bordering almost with pampering. Among the unliving, to hurt a Kavokh is one of the most impolite insults of their ownera - the Supreme Irradiated punishes such offender by throwing him into a burning vatt.

Kavokh's cranial cavity contains a gel-like ganglium named in the original wigittan dialect as khoo'ka'wa. This powerful liquid brain allows him to communicate with other Kavokhs using a simple form of telepathy. These creatures otherwise cannot hear nor produce any form of sound. It was repeatedly proven that these unliving are gifted with advanced intelligence.

Kavokhs do not reproduce at all. At certain stage of their unlife, they hermetically conceal themselves within a solid shell, which slowly dissolves itself over time. Once this crust receives critical income of energy, a reverse body reconstruction process is ignited, which removes all the previous damage and deficiencies. The renewed Kavokh regains conscience already after several Tols.