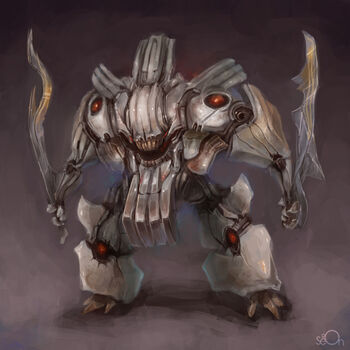 Had Dolgith not slipped into criminal activities, he could have made living as a professional armorer or smith.
(Coraabia Artist: Seoro)

Dolgith always walked on the dark side of the law - already at an early age, he spent few Tu in prison for a series of armed robberies. He always preffered the adrenaline-charged action itself to the actual spoils of his plunder, as though as if he viewed lawbreaking as a form of extreme sport. His targets of choice were government enterprises since he did not like to rob honest private entrepreneurs. Sometimes, Dolgith would rack up style points during the hold-up by basically forcing the terrified salesmen to press the alarm button so that he would not miss the ensuing getaway, which he also made more interesting by waiting for the arriving policemen instead of simply getting a boring headstart. His reckless nature ultimately caught up to him. He died as he lived, being shot during one of the numerous chases with the forces of law.

With the help of few manuals, Dolgith constructed his own battle gear which costed him de facto all the loot he accumulated and he still had to borrow the missing money from his family. Therefore, it can be said his risky profession meant everything to him. Several times, he refused to join the Zapraskal's gang, stating he was not a team player. Accomplices would just slow him down during his risky escapes from the crimescenes.

Dolgith was once released from the prison on parole for agreeing to snitch information about his colleagues to the police. The Miner thief showed great courage during the several Tu he casually served on a silver platter his "one hundred percent guaranteed information", every single last piece of which originated entirely in his head. For a long time, the police was "on hot trail" of several fictional gangs, pimps and mass murderers.