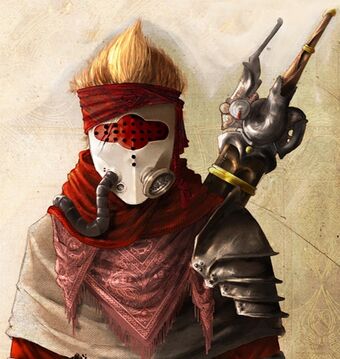 Donner has always wrong-footed his opponents. Despite his deceptively small frame, he was an extraordinarily fierce and dangerous enemy, as only a true CuCaanish Kcheman can be.
(Coraabia Artist: Joel Amat Güell)

Also known as Donner the Hunter. He worked as a bounty hunter on CuCaan for over fifty Tu before reaching the top in this field. Then around 4180 Tu, he suffered a breakdown from his long-term addiction to ethanol. After finishing the treatment, he left his homeworld for travelling across Coraabia in an effort to find himself again. He achieved a lot more. After several decades of hard and honest labor as an ordinary ligan serving in the Liga, he was unexpectedly offered the vacated post of Liganor instead of Pjaar Kanth during the so-called Ligan schism. Donner accepted the honor with hesitation but shortly after ascending to the position, he reformed the organization profoundly - since then, the head of ligans has been fighting in the field just like any other and has begun to bear personal responsibility for actions of the Liga. The harsh centralized elitism of yestertu has slacked off significantly.

Donner was well known on CuCaan for his ethanol escapades. Along with his drinking buddies, he once built a giant tower of glasses into which he then accidentally fell. He lost two thirds of his bodily fluids due to the cuts but ultimately survived.

In an interview for sub-channel Kot-Agan, Donner said he would like to see Dogont as his successor to the Liganor office. He reportedly said off the record he would like to leave the Liga within a few Tu and return to CuCaan.