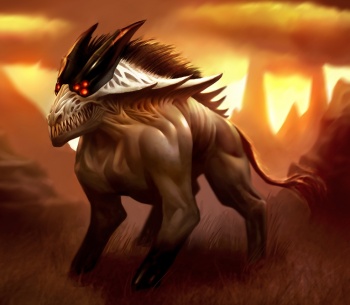 The dangerous predator in its full glory. Drinh, originally an apex predator of remote periphery, is increasingly seen in the suburbs of C'Ora. (Coraabia Artist: Marcel Stobinski)

This carnivore managed to confuse even the best xenists for a long time. As a part of the Unliving fauna, it does not have any natural need for consumption of liquids or food, nor does it need to breathe. Yet still it has precise vision, saw-like teeth and the hardest skull among all the Unliving, turning drinh into a flawless predator. The question was, for what reason would a predator evolve from a lower Unliving. The direct purpose theory explains this puzzle as an intelligent design on part of the Haze cultures. This claim became a subject of harsh criticism almost immediately and the theory was largely abandoned. Yet based upon convincing evidence extracted from deep genetic analyses, the annals of leading institutions such as Yon-Toa still contain clear confirmation of the direct purpose theory.

Study of behavioral patterns uncovered interesting facts. Drinhs consume exclusively flesh of the Unliving, preferring the flesh with more significant genetic degradation. They seem to fully ignore the Unliving in good genetic condition as well as all living creatures. This discovery supported the hypothesis that drinhs' purpose was to regulate the genetically damaged Unliving populations by prohibiting further replication of their degraded genes in the vats.

With continuing spread of civilization, drinhs are gradually retreating into the peripheries to evade the living population. Yet it is not uncommon for some lone specimens to repeatedly appear in the outer Sectors. From time to time, a whole drinh pack can be observed while hunting groups of unfortunate lachtos. The government quietly tolerates these activities - the carnivores are basically doing a lot of unpopular and dirty work for the centropolitan forces.