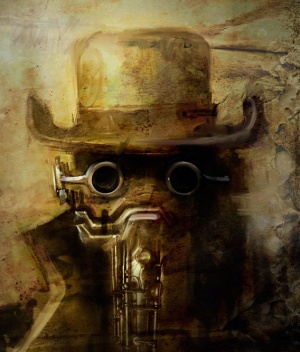 One of the most famous and dangerous desperados that have ever walked the surface of Coraab. He earned his place in history during the Period of Unliving states, where he led bloody ilokai revolt against |Wild Bones and Atomi. He later became a legendary assassin, sellsword warrior, whose deadly precision with two ancient Waarch weapons was often used - and paid - by gang lords, powerful Zomb rulers and sometimes even the government. Even though he came from the Rusty dunes and the Perifery, he saw himself as a member of high society and reveled in expensive clothing and luxurious goods.

Huge bounty was offered for Drugar's head, supposedly by Zomboss himself, as an vengeance for extermination of several Atomi settlements. Professors of Orbital University later calculated, that bounty that would cover expenses for safely capturing and delivering him would have to be at least three times larger.

Fictional tales of Drugar Ulcerpus were even turned into adventure-comedy series Moi Drugga. Local sub-tabloids were later given an exclusive story to tell - after a few episodes aired, the whole filming crew was found dead in the studio, long dead and rotting.