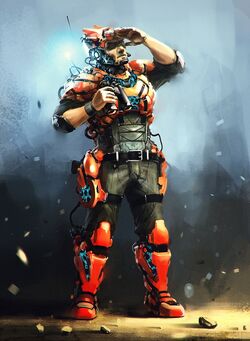 Ha'Kop Dubh is one of the most able members of 3-LAMAE. He is efficient, law-abiding and his service does not stop at the end of his shifts. Coming from a family that stood at the very beginning of Planetary Kops, his upbringing resembled police training. It was then no surprise when he graduated from the On-Tok academy as a valedictorian. His examiners were impressed not only by his physical skills, but also by his incredibly rational thinking. Unfortunately, that took its toll on his younger brother, who was wounded while playing an extra in a fictional counterterrorist exercise. Even though he is incredibly hard-working, Dubh cares little about his career growth - he settled for a position of Ha'Kop, the second-in-charge in the Sector hierarchy. In fact, he comes into the spotlight only during the annual Tu'Kop contest, which he has already managed to win three times.

His professional strengths, however, are also Dubh's biggest character weaknesses, as his strict self-discipline and high moral standards have always prevented any closer contacts with his colleagues. He once even assaulted of his female colleagues. His superiors have always let him off the hook because of his impressive results, though. After all, no disciplinary words or actions would be able to change Dubh's stubborn stances.

Recently, Dubh's life has been shaken after a routine mission in a xottery. Finding himself in a cross-fire between two armed groups, he soon discovered that he does not have to care about civilian casualties but only about his own security, as the entire event turned out to be an assassination attempt. Even though he lost one eye, it was an eye for all attackers' lives. Among them was his younger brother, who never forgave Dubh for the incident at the academy.