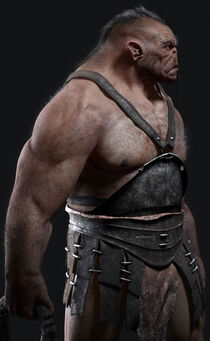 Dumhead is a former member of the Blupan syndicate. Nowadays, he lives in derelict sub-squats of the central Sector 2. After serving his eight-year sentence, the young and lively antu promised himself to leave the outlaw's path forever. He spent several years working as an assembly technician in Bai-Kopt but he was fired for petty theft in the end. Dumhead lost his probation allowance and ended up in the slums virtually overnight. There he got to know the sub-squatters who provided him with shelter in the bombed heart of the centropolis. Dumhead started a new stage of his life there - kidnapping civilians for ransom, his new field of expertise. To his credit though, he apparently takes good care of the captives. Some survivors even state that Dumhead cooked them 2 hot meals per day.

In 4249, the sector Kops conducted a well planned roundup in the docks of TolChent and Blupan ceased to exist. Virtually all the leaders of the syndicate died during the gunfight. The few surviving functionaries were found guilty and executed. Dumhead, as a common lackey, escaped with a milder punishment. He is basically the last survivor of the infamous gang today.

The truth is that it was Dumhead himslef who caused Blupan's downfall. Syndicate members somehow managed to capture a male Xago after it escaped from thea xennoZOO. They put it asleep and were going to sell it but Dumhead provided Kops with accurate information about the place and date of a transfer of the contraband. He never got the reward that was promised to him. Instead, he was brutally beaten by the police after the arrest.