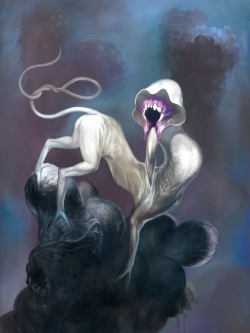 While Egruuk lays up to three clutches of eggs over the course of its life, only a handful of hatchlings survive to adulthood.
(Coraabia Artist: Toronn)

One of the most recently discovered ruuk species, originally coming from the distant world Xö. Egruuk is blind and orients itself thanks to pheromones it uses to mark its territory. The olfactory organ called Blögmar it has in the mouth can smell prey many kilometres away. This frail creature feeds itself primarily on meta-insects and treepires - hanging by tail, it can patiently wait for days in an attempt to emulate the look of surrounding carnivorous cocoons from M°Thoi genus. Instead of feasting on the cocoon's innards, the hapless victim then climbs straight into egruuk's mouth. Egruuk is a solitary hermaphrodite, reproducing by self-fertilization. Should two specimen meet in the algaeland canopy, a fight to death is usually in order. The one which sticks its Blögmar deeper into the other's mouth is the winner.

Egruuk is one of the few ruuks that is edible for the majority of sentient races; even in the distant past, it was a popular treat served at Annorian courts. Candied egruuk marinated in bismic oil with pattypan croquettes thus became an evergreen of opulent feasts and ceremonies. Today, it is afforfable even for affluent tourists-gourmets with refined tastes.

Khalfassan dockyards provide a new use for egruuks - local smugglers organize the annual Great Blö, during which they force the beasts to fight to the last egruuk. The downside to this pastime is the length of each match; while the encounter itself lasts only a couple of seconds, it is preceded by hours of careful maneuvring of both hanging creatures.