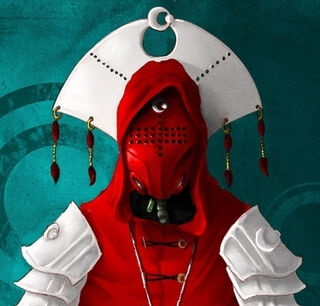 Originally known as Xenuth the Smuggler. An interstellar pilferer who attempted to sneak into the sector of excavation planets guarded by the Liga. It didn't take long before he was detected and the security force cornered him on one of the minor planets. However, after landing, Xenuth exploited a loophole in the complicated legal system of Cosmopolitans and proclaimed himself Emperor Xenu just moments before being arrested. The complex but strictly followed bureaucracy really saved him from imprisonment and the following years-long holdups ensured him a reliable asylum until his death. On the otherwise completely desolate planet, he ruled as a secluded emperor for over 80 years without a possibility to leave the planet.

Not widely known are the so-called Xenu's immigration paragraphs which state that all forms of life are illegal and which completely prohibit all movement or breathing on the planet. The emperor was probably just trying to prove he was staying on the planet of his own free will and not because he was forced to.

As the rightful emperor, he was automatically being sent invitations to the social gatherings organized by the Searth union Sooea Ttaebu. Xenu always politely declined with the excuse that he was too busy building his platinum palace and tending to his vegetable garden.