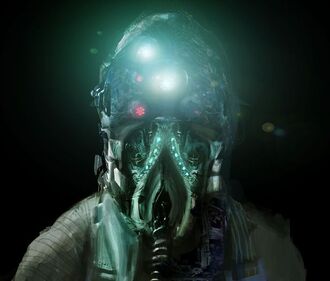 Endur's past is relatively unknown to public, even though it is clearly evident from a recently stolen internal InCorps sub-log that he "returned to Coraab after a long mission in the Xennozone". He was brought to the InCorps in 4269 Tu by intergalactic Hermes to dismiss the suspicions that all posts in the command of the InCorps were held solely by loyal Miner traditionalists. Endur was officially enrolled as an armo for relations with the Xennozone, even though his only known negotiations were with the Liga during trips to Agan. In case this di-armo (higher ranked armo) really embarks on missions to xenic worlds, his activities must have been top secret. Endur spends most of the time in [[Nadda] on the 366th floor in his hermetically sealed office designed to allow him free movement without the need of a protective suit.

Shortly after Endur's arrival to InCorps, a lot of new employees appeared on various positions in Nadda. While insignificant, these people were suddenly everywhere - janitors, messengers, assistants. Silently, a secret internal clique later dubbed the Long tentaculum arose in the InCorps. Endur was thus able to gain unprecedented power over the happenings in the office, all behind the senior armos' backs.

Endur's rise was almost grinded to a halt by his competitor, the insidious armo Tubon. Thanks to an ingeniously camouflaged indictment, Endur is seized by Bahoofa on the grounds of obtaining an illegally constructed stringer weapon. Endur manages to evade this threat but it costs him an enormous sum for silencing all witnesses. To de-escelate the conflict, Hermes decides to act and transfers Endur to the R.A.A.E stratospheric air units, where Endur soon receives a mocking nickname The Coral.