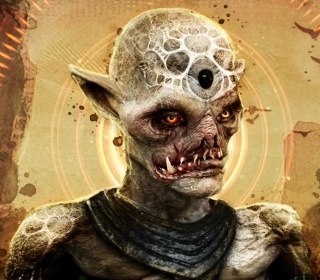 The Bzang beings are very rare subtribe of vatters - it is estimated that there are only several hundreds of them on Coraab today. Bzangs are classified as vatters despite the fact that they do not reproduce. The Vat plays an important role in their unliving cycle, however. A quarter of the body of a Bzang being is composed of biomimetic mushrooms only a few nanometers large. If a dead Bzang is thrown into the Vatt, the mushrooms initiate a progressive tissue regeneration, which regenerates the individual and subsequently activates the body. It is however not a mere return into unlife, since the regenerated individual is "reborn" with a new character. Even though he possesses the memory of its predecessors, the newly born Bzang always chooses a new name. Bzangs talk using a weird sign language, which is yet to be decoded by the linguists and scientists.

The speech of the Bzang beings is composed of harmonic knocking and clicking, which is accompanied by head movements. The speech stimulates Bzang's frontal nerve centres containing biomitetic nanomushrooms. These subsequently react by emitting of so-called bzanial waves which cause other unliving to see vivid images and feelings. The living individuals are affected by the waves similarly - they get into a strong hallucinogenic state, which is however without any withdrawal symptoms.

Thanks to the effects of their unique speech on the living beings, the Bzang are a spectacular attraction in the most successful xenocirques. Only ancient Zaans - who like to be surrounded by Bzang beings - are aware of the damages that the radiation is causing and that it can lead to severe and even to terminal illnesses. Bzangs were most likely given this ability to be able to repair unlivin tools of the Haze cultures. Little is it known that Bzang are able to use their speech to produce also a reverse effect.