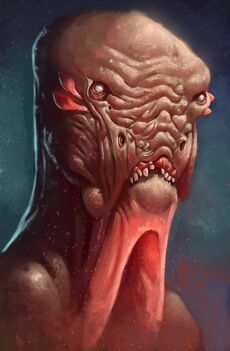 Voors are well known for thier extreme toughnes - they are brutal and vicious creatures that are best to avoid. Erdha appeared in Coraab's database of wanted criminals in around 4230 Tu. He ambushed and murdered members of high society and quicky caught attention of elite Bahoofa foces. He was arested soon after. Police agrava hit him during the pursuit and caused massive damage to his face. Voor, obsessed with his symmetric look, feels utterly ashamed and even after sentenced for life, yells at the judge and blames kops for shamelessly maiming him. He ended up in strictly garded Goa'Kach workcamp, but managed to mysteriously escape after a few Tu.

Erdha befriended camp's quartermaster, coincidentally Voor himself. After Erdha killed one of the inmates, he discovered large xot chip in his bowels - large enough to bribe the quartermaster. The daring escape followed, with Erdha sitting in custom-made shielded kitchen pot full of date pudding.

Sadly, Erdha didn't enjoy the newfound freedom for long. Authorities iniciated hunt for him, forcing Voor to constantly run and hide. Surrounded by police in Neo-Bujka casino, he captured several employees as hostages, but never formulated his conditions - 3-LAMAE commando snipers turned him into a bloody sieve.