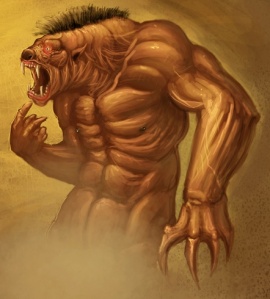 Although frenetics are born as a result of an incestuous union of two latents, research shows they are more than just degenerate latents but rather a distinct tribe that was once formed through a unique genetic mutation. Frenetics are thus the only known Unliving tribe originating via mating of another species. Generally, though, they are viewed as a seriously outdated evolutionary branch that does not bring any actual benefits. Unliving farmers latents are using frenetics to cultivate their fields and also for other inferior work. Although both species have a common origin, tribal and family ties are virtually non-existent. On the contrary, there is a considerable tension between the two. Aggressive frenetics are kept in the same conditions as wild animals.

Cases when a frenetic furiously attacks or even kills his master are no exceptions. Their aggression may be reduced by tearing off their teeth or performing minor surgeries but those decrease frenetics' labor productivity and thus these methods are, despite the higher risk, not widely used.

A deformed creature that is neither a purebred frenetic nor a latent is sometimes born by mating of two latents. It is called Wernch'Ferr (halfboy) and because of its negligible intelligence, it is used exclusively for the simplest of farm chores.