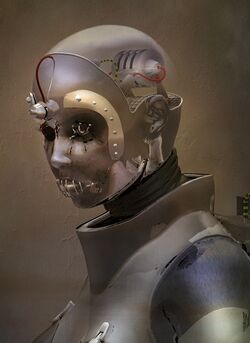 Low purchase costs and incredible versatility – these attributes raised the GL9001 series to an almost cult status in the field of technology.
(Coraabia Artist: Anders Plassgard)

Era: the first series was produced in 2991 Tu

Jelly was practically the first hi-tech product from the faraway WaalkWak to be officially distributed on Coraab. The artificial servant was a real hit in its time. In C'Ora, people spent days in queues in order to get it. The black market price exceeded the official one twice. Critics say that the buying spree was launched by a sophisticated advertising campaign. It involved the very first usage of a large-scale orbital banner. GL9001 offered 9001 functions including a tax advisor, stand-up comedian, steward and masseur. Beside its multi-functionality, there were other advantages as well. Bot's spare parts were cheap and easily available and its interware was widely adjustable. All of this made GL9001 a loyal servant for centuries who has been a popular item of technical museums up to now.

In fact, GL9001 was even more universal than the manual claimed. Many inhabitants of the poorest Sector slums started their business by modifying these bots. History saw the Jelly as a field surgeon, vi-mag, gmonk dancer, grand master of Thu'Ku or peddler. A squad of specially adjusted GL9001s even used to travel with a transplanetary Miners' ship Mak-Mino.

WaalkWak is known not only for its technological prowess, but also for its ruthless bargaining techniques. The GL9001 series was already very outdated by the time its export to Coraab began. All developed worlds had lost their interest for it long time ago. The sales numbers, however, took the WaalkWakian salesmen their breath away – Coraabians bought incredible seventeen millions of pieces during the first ten years of sale.