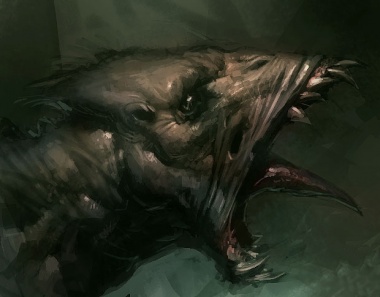 One of the first discovered ruuks in the Xennozone. Annors have always highly respected glauruuks, ancient annals mention them as fierce predators - who have sadly exterminated themselves in the past after a streak of bad luck. Glauruuk grew to almost 2 meters in withers height and was able to split his victim in half with a single bite. His tense skin filled with tri-buroten was immune to all Annorian slashing or piercing weapons. If you met a glauruuk, your best chance was to scream as much as you could, because their auditory apparatus was very sensitive and loud noises caused them unpleasant muscle tensions. It was no accident that members of tribes living on the border of glauruuk huntin grounds were called AaiaKao (Screaming statues).

In the course of centuries, numbers of glauruuks kept decreasing constantly as a result of the newly-invented acoustic traps, which Annorian hunters tirelessly kept placing around their territories. A decree issued by the local doge did not make the situation any better - the doge found an obsessive passion in collecting glauruuk's teeth and was willing to pay generously for them. His collection supposedly contained up to twelve thousand specimen.

The destiny of glauruuks was sealed with the arrival of moiruuk, who thrived thanks to the ideal conditions on Annor - in few decades, overpopulated moiruuks ate all the hydrogen sulfide sporangia which formed the cornerstore of nutrition for glauruuk's key prey - Bektezon. Maddened by starvation, these vicious predators resorted to cannibalism which soon lead to their extinction.