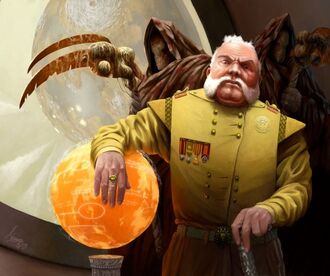 Nicknamed Tal'Thu (Old Tal) by many Coraabians. This likely most influential Miner of the present day is steering the coraabian politics for one century already. Mbehir Zula shortly worked as a byrokrath in the intersector relations, later served as an advisor of the boroistic B'Wor Bakusta Tork. After disassenbling of the Circle Lodge he was unexpectedly promoted into the directorate of the centropolitan governate (C'Orai) in the position of cohhazaan, the head administrator of C'Ora. Thanks to these events, Zula was able to cumulate power, which the previous democraticaly elected administrations could only dream of. Critical voices got quickly silenced thanks to a recent massacre of students on the Orbital university. On the fifth session of the Circle Lodge, Zula was given the lifelong function of centropolitan governor by protector Hangul.

With his uncompromising politics in C'Ora, the strongly conservative Zula quickly antagonizes especially the unliving tribes, whose rights he gives little attention. Many say that the state of the society is slowly coming back to what it was before the Fifty-year Skeletate. There were four assassination attempts on governor Zula's life. The Old Tal is however still in excellent health.

As the time passes by, a rumour is spreading among the Coraabians that Zula is a mere figure in the hands of InCorps and in reality he just slavishly executes the will of the Coraabian military elite. Majority of the centropolitan population is thus eagerly waiting for his death, as it is not yet quite sure that a new cohhazaan will be elected. The Bureaulogs documenting this are subject to the highest level of secrecy.