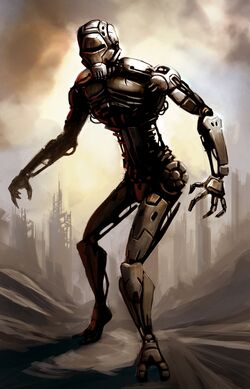 Hand was born as Koh 7-Men-El, youngest son of Bur 0-Men-el, administrator of a huge industrial complex on the Khoma mining world. The ambitious Werdio spent all of his free time in a botter workshop, where he worked on various interware upgrades for father's machines and demonstrated exceptional talent in a range of technical disciplines. After Bur's death, Hand passed his share of the family business to his older siblings, who paid him out with a generous sum. Koh invested almost all of this Xot into advanced cyborgization of his own body, on which he already carried out numerous experiments and upgrades. in 4234 Tu he departed for Agan to fulfill his old dream. It was nothing less than to enter the Agada halls and become a famous ligan.

Hand is accepted into Liga only on his third attempt in 4245 Tu. He gains his typical nickname thanks to his self-made limb, which is also his primary weapon. Hand is able to paralyze much bigger creatures than himself by merely touching them. Thanks to his hand, he is able to telekinetically manipulate objects and after careful calibration, he is even able to carry out advanced medical operations.

A huge disadvantage of Hand's ultimate weapon is its mind-blowing energy consumption. Due to this, Hand is dependent on tri-buroten power cells imported from the distant Xenozone. Since Liga lately decided to stop paying for these expenses, Hand has to procure these cells from his own funds.