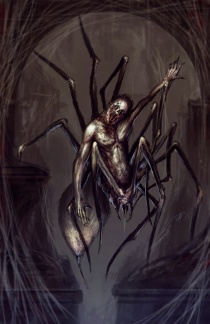 Called hhanth or arach among Coraabians. Hanths are one of the artificially bred Unliving tribes, engineered only to serve the society. Decades of genetic experiments and cross-breeding of Vatters with rare meta-insect of Barehammada species resulted in birth of entirely new lifeform. Hanth were created for one goal - to solve dramatic Sweller overpopulation in sewers of rapidly expanding Cor'a. Thanks to genetic engineering, Hanths can grow up to sixteen legs and are fatally addicted to tri-chitin (abundantly present in Sweller bodies). They have perfect darkvision and immune system capable of neutralising deadly toxins present in the sewage.

Hanths, despite being Vatters, don't require reproduction vats to breed - they simply spill their genetic material into the flowing sewage. Paradoxically, this allowed Hanths to become even more overpopulated than the Swellers (those got nearly extinct) and now thousands of hungry Hanth wreak havoc in the underground.

Centropolitan government was forced to act. In 1824 Tu, all sewers were ordered to be filled with strong bio-acid. This extremely expensive procedure got never finnished due to corruption and sluggish workers. Hanths survived and their numbers got even higher. The problem was not solved to this day.