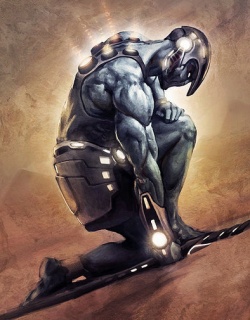 He was offered a membership in the Liga twice but he declined. Hefthor despises Liga because it seems to him like a unflexible organization of elitists that swallows the money of honestly working Cosmopolitans. He prefers to serve in aganian special forces because there’s always something to wage war with. Hefthor minds the most that ligans look towards the distant worlds for adventures while spores of mycoids spread at home and the whole worlds are being troubled by humanitarian disasters. He personally participated in many dangerous operations where he experienced horrors which he will remember until the end of his long kanth life. Today Hefthor leads soldiers of aerial commandos Mesora-Gar to war. He is popular by his men for his calmness and big amount of personal appointment.

While searching in his kanth family tree, Hefthor found out that the one and only Pjaar Kanth was his grand granduncle. He was notorious for his brutal deeds and behavior and this fact may be the reason of Hefthor’s grudge towards the Liga. In grain, Hefthor is a very sensitive and humane Kanth of lesser path; he would never choose the path his ancestor took volunteerly.

Hefthor always fights with paralysive weapons and he tries to maitain the losses of lives minimal on both sides. His technique became an example for many Cosmopolitans in military service but this doctrine caused prison moons on the orbitals of mining planets to be more than full.